This is year number 2 for the Astronomicon take over of the Wyndam Gardens in Sterling Heights Michigan and myself and WRIF were asked to be involved with the convention again! Last year was a blast and I was really impressed with it, they do a great job of pulling in the best of a bunch of different fandoms and a good lineup of celebrity guests.  I was really looking forward to this years con and I was immediately surprised when I walked in because they went out of their way and printed up a banner just for me! MORE INFO ON ASTRONOMICON

Me and the WRIF crew hung out at the con Saturday for a majority of the day.  The station was setup bright and early and left around the time the convention hall closed. While we there we played games that involved tossing turds at a team mates head for prizes and also had some cosplayers compete LIVE on the Dave and Chuck the Freak twitter page in an “Astronomicon” themed version of PORNOgraphic.

Playing an #Astronomicon themed version of #PORNOgraphic with cosplayers at @AstronomiconMI https://t.co/7hGJhyxHOd

if you're heading out for the last day of @AstronomiconMI be sure to stop by the @GhostbustersDT setup! Play some video games and suit up in front of the green screen so you can get put inside some of the #Ghostbusters movies! 🤘🏼👻 pic.twitter.com/MkCtfnupeE

Here is the fist episode of “Inappropriately Speaking”

Here are a few shots I was able to capture. 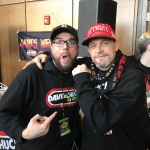 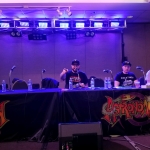 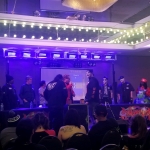 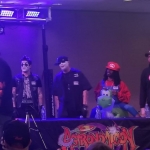 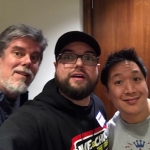 Mike and Ming from Comicbook Men! 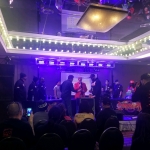 Going toe to with Mike from Comicbook Men (I won)

Here are some photos from WRIF Crew member Rev Robb

Thanks to Mike, Dustin, George and the whole MNE Crew for putting on a great con and allowing me and the WRIF Crew to be a part of it!

Can’t wait to do it again next year!